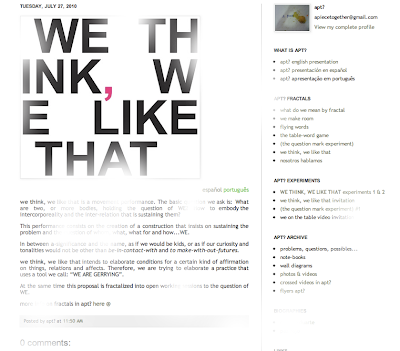 PARAMETERS
Location: A theater, a university, a hall in train station…any “public space” whose dominant representation in terms of roles, time and perception could be cancelled.
Basic-General condition: this "practice" may not be announced a priori. It should engage people through another announcement basically engaging the participatory activity that the public space is usually engaged with.
Basic Ideas:
· To cancel the dominant representation of such a “public space”. For instance, in the case of “theater”, it could be to cancel the stage, spectator, piece, performer/author, frontality, selling, product, time-frame…etc
· To make a collective-useless construction that gives something to thinkto others…
· To hold the question of what? for whom? with whom? what for?
· To re-signified the use-value of the notions, space, content and relations involved in such a “public space”.
Basic metaphors:
· “moving”
· Moving, where?
· To cover the entire materiality of the space with materials for a “move”
· To camouflage the entire dominant representation of “public space”
· An strike with no address and no claim specific of anything and to no one…
· A blurred perception of the situation
· A blank page over which, to rehearse with others “being together?” in a public space
· A space out of use
Duration: (2 hours minimum)…it can only be finished?, when an authority - security guard (or similar) that takes care of the public space - says that the space will be closed.
Number of participants: everybody who is in the space is a potential participant.
Necessary materials (quantity must be calculated in relation to the size of the space and the number of possible participants):
bobinas/rolls of bubble plastic 1,30 x 100m
bobinas/rolls of kraft paper or similar 1,20 x 250m
tapes: for packing (crepe)
Boxes: cardboards (different sizes)
Garbage bags
Scissors
Sprays (different colors)
Nose masks
Color pens (permanent markers to write over paper, buble plastic)
TASKS
• Make yourself busy with wrapping walls, floor, objects…etc
• As if the space would be about to move somewhere, at the same time that is wrapped, you “name” what each thing is. This means that you name the materiality of the space you are wrapping for what it is.
• Involve others in things you do.
• Help others in what they are doing.
• Ask the help of others on what you are doing.
• Once the at least 70% of the space is wrapped, you start to relate the materiality of the space that has been named before. You do this, mapping out the process of your perception over any surface in the space (walls, objects, floor, boxes) by using the material available (pens, sprays, tapes).
• Relate, cross and use your mapping traces with the map-traces of others.Conditions
• Be simultaneously busy with what you do and how your thinking process is communicated in the space.
• Everybody involved in the experiment is acting and treated as an “assistant”. That means that you are supporting peoples actions and, at the same time, you are supported by the ones of the others.
• You are not allowed to talk or explain anything about what you are doing to others.
• You are not allowed to do anything addressed to anyone (there is no front, nothing to show).
• Everybody in the space is potentially in the same game, which means that the audience is there to do the same as we do, but no one is obliged to join.
• You are perceptively in contact with the space around you and what you are doing.
STRATEGIES
• The mapping of the space, may be perceived as a “semiotic battle”. It may be a strategical game of its potential and collective content and expression.
• When you put your mapping process in relation to others, you may take care that it doesn´t cancel the proposals of others, but that you give “life” to them.
• You may want to start mapping the space by “naming” what that space, object is, could be, is doing to the space, to you, to others…etc. In that sense you can relate the name of the material in relation to: Rename the covered surface, object for something that is not, You can adjetivized the material, You can put it in a circumstance: where, how…etc, You can humanized the material, You can put it in situation of...
• During your mapping, you may want also to problematize the general thinking process and experience of what’s going on. That means that you may want to treat the materiality and its mappingas: Crossing, Subtracting, Cutting, Addon, Recombine, Displace, Dividing, Kidnap, Transforming, Piercing, Breaking, Covering, Decomposing, Re-composing…etc
• You may feel that you want to relate performatively with what is written and what is being done in the space. Not only the actions you may do, but also the way the words are inscribed on the surfaces, the way they look like, the process-action of its writing…etc
• If there is a technical problem, you communicate it to the others with normality…that´s part of the situation we are creating…so you ask for cooperation, help…etc
• You may feel at some point that you need a break, in that case you can play the radio, music or have a snack.